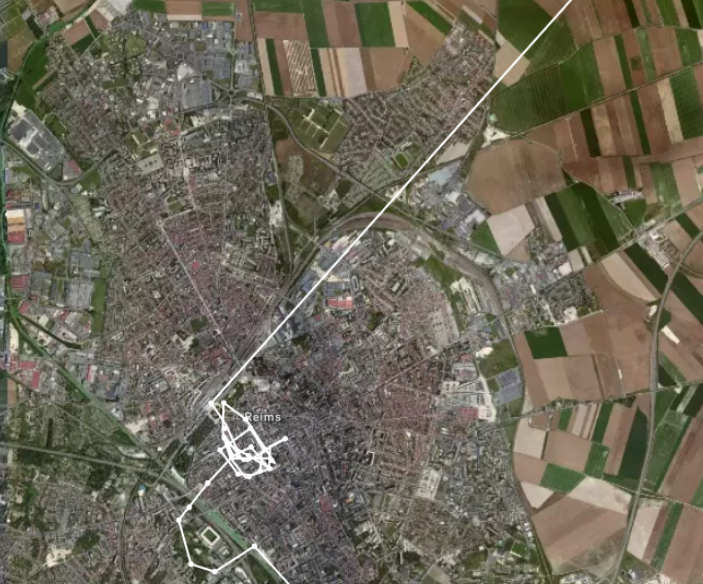 Family worried
This last week Casper had some nice progress but also some setbacks. People that follow him on Polarsteps were seeing him walking in a circle one time, then double backing to where he came from and then all of a sudden going a straight line. His father and sister were getting worried especially when they couldn’t reach him by phone.

Persistence
But after 24 hours of silence there was Casper with another story of persistence. He was near the French town of Givet and connected with one of the pilgrim routes in the hopes that following the established route would be easier and heavier traveled by fellow Compostela walkers. He walked for a while following the signs and then the terrain began to get hilly and harder to maneuver.

Stuck in the mud
He had to climb an elevation of about 500 meters. Not very high but it had rained and the road was slippery. His cart felt heavy and was frequently getting stuck in the mud. His hands started to hurt! Going up the hill he had to push harder and going down the hill he had to use the brakes the whole time! As he went down the hill he all of a sudden slipped and fell. The cart was at risk for rolling down the hill so he put his foot out to stop it but now he could not get up. Casper, challenged by his eye-hand coordination handicap, couldn’t maneuver and laid on the ground for two hours when two local walkers came upon him.

Skip the hills
This couple lived down the hill and walked different parts of the Compostela every year. They helped him up and walked him and the cart down to their house, gave him some good food, a hot shower, washed his dirty pants and called their doctor friend who made a house call to make sure Casper was OK. After a good night sleep at their house they drove him and the cart to the train station and suggested he skip these hills by taking the train because they are known to be tough.

Arrived in Reims
He did and now he is in Reims. Casper is finding people to be extremely friendly and super helpful. Other walkers share their experience and help with direction. Despite the setbacks he is good spirit and is already talking about how he might do this trip differently next year!